I was hanging out with my friend and honestly one of the things we like to do best is sit around and chat and paint our nails approximately 15 times. 😉 She came over this weekend while my husband was hunting and I decided to change up my Deep Sea Mica nails and added a black tip. Then I asked her opinion of what else I should do and she suggested glitter so I slapped some Sugar Plum Yum (Color Club) on the tips over the black. Here they are: 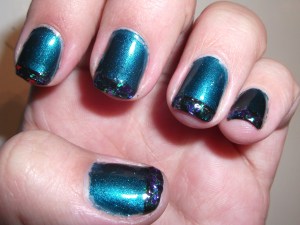 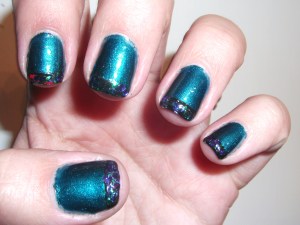 These nails were fine, but nothing special in my opinion. One thing that I hated was that this glitter is the same consistency as Very Merry Berry which is super chunky and has a slight “taco glitter” effect, which has an awesome crazy sparkly effect on the nail, but I added a tiny bit more after I was “done” and didn’t put on any more top coat for fear of making my tips too swollen looking, but the glitter was SO SCRATCHY! Oh my gosh!! It was killing me. I had to remove it after one day. It was getting caught in my hair every five seconds, scratched me all up when I was washing up in the shower, nearly snagged some clothes when I was shopping… it was horrible! I’m going to try to go on a glitter hiatus for the next couple weeks. (WISH ME LUCK!)

Have you ever attempted a glitter hiatus? Do you think I’ll make it for more than a couple days?